Bowen Nuggets – From Father to Son

My relationship with my father was tepid, punctuated by occasional violence. Like many men, I swore I’d never treat my child the way he treated me. As a young camp counsellor, my glowing evaluations confirmed that I was nothing like him. This was an understandable, albeit naive belief.

In the mid-90s, I was in graduate school, studying clinical Social Work at McGill University. My interests were mostly psychoanalytic. Could there be a better job than exploring the cavernous depths of a stranger’s unconscious? If there was, I couldn’t think of one.  However, my program required all students to take an intro to family therapy course. I had little interest in family or couples work and could not see how any of this was relevant to my Freudian ambitions. That all changed when I read in the class text about triangles and family systems theory. In just a few paragraphs, the editors encapsulated the dynamics of my family. Before this reading, I assumed that my mother’s confiding in me about my father was normal. Isn’t that what good friends do?

One particular passage prompted me to not only rethink my relationship with my parents, but also to grasp the very real possibility of repeating the dynamic in my future family:

Bowen came to believe a triangle is the smallest stable unit of relationship.  A husband who can’t stand his wife’s habitual lateness but is afraid to say so may start complaining to his children. His complaining may let off steam, but the very process of complaining to a third party (his children) makes him less likely to address the problem at its source. […]Bowen later realized unfinished emotional business stays with us, making us vulnerable to repeat conflicts we never worked out with our families.  (Nichols, Michael and Davis, Sean. Family Therapy, p. 77)

I recall reading and rereading that passage. The editors suggested that if one could de-triangle and foster one-to-one relationships with each parent, change would be possible. This sounded farfetched to me. Still, my desire not to repeat this pattern with my own children was more powerful than my skepticism. If I wanted to be a better father, I would have to change.

I started with my mother. I told her that I would no longer keep her confidences about my father secret. My mother was furious. And I was left wondering, what would happen if she could not abide by my admittedly crass and hodgepodge attempts to define myself?

A few weeks passed, and my mother and father had a fight. She told me that she was considering a divorce. I called my father and told him. It seemed he didn’t know what to do with me or the information. He called my mother and told her about our conversation. My mother called me, aghast – How could I betray her in this way? My attempts to cultivate one-to-one relationships with my parents went on for some time. Systems theory helped me prepare for the turbulence. 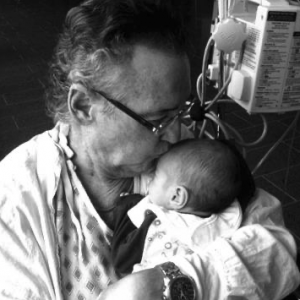 Ultimately, my parents did divorce. When the dust settled, my mother and I were able to have a relationship without discussing my father. Newly single and living on his own, my father suggested we pick up the work on our relationship. He took the first steps by writing me a letter, which concluded with: “I hope in the not-too-distant future we can become not like father and son but more like good friends. This takes work on both sides.” My dad lived just long enough to hold my newborn baby in his arms, his first grandchild. He died a few weeks after this photo was taken.

I will forever be grateful to Bowen family systems theory for providing me with a north star, a way to think and navigate the seemingly gridlocked patterns in my family.

Avrum Nadigel, MSW, BComm is an author and family therapist in Toronto, ON. His most recent book, co-authored with Dr. David Freeman is entitled: Where Would You Like to Start: A master therapist on beginning psychotherapy with families.

4 Replies to “Bowen Nuggets – From Father to Son”